In the middle of February I flew to NYC to photograph engagement pictures for beautiful Anastasia and her fiance Eugene.
Due to the fact that it was Valentine’s Day Weekend I decided to surprise my girlfriend and bring her along.
Once we arrived to NYC, we checked into our hotel, and soon after went to Times Square to meet the couple and take some photos.
We decide to snap some pictures on top of red stairs in the middle of Times Square. While I was shooting pictures I look over to my left and see man hand a digital camera to my girlfriend asking her something. Not paying too much attention assuming he simply asked her to take a picture continued shooting away. Although, to my surprise, I watch him reach to his pocket and take out a box. Instinctively, I look at my camera, changed some settings and immediately start shooting. Approximately 30 seconds later the full crowd around us burst into applauds and celebration of their engagement.

We approach the newly engaged couple, Anthony and Rehanna, we congratulated them and mentioned that luckily I was able to capture the special moment for them. He was thrilled and took my business card. He e-mailed me shortly after asking for the pictures. As soon as I got back I edited the photos and sent them to Anthony. Intrigued, I asked him his story and what made him decided to propose in the middle of Time Square on the red steps. 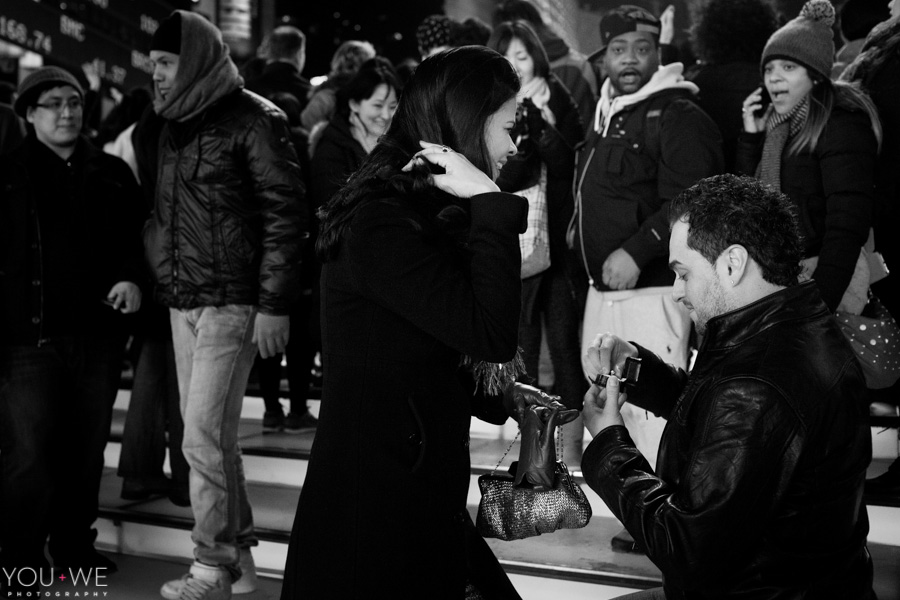 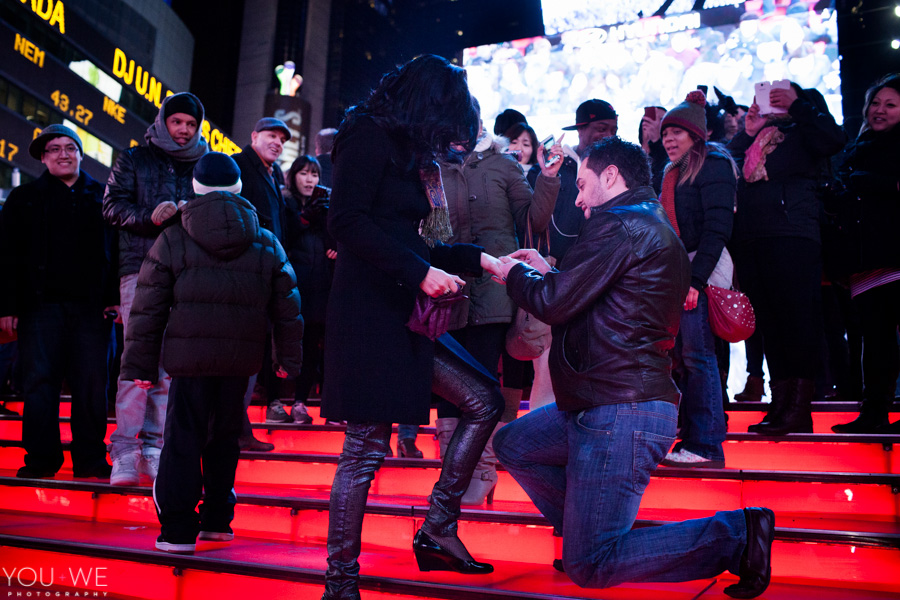 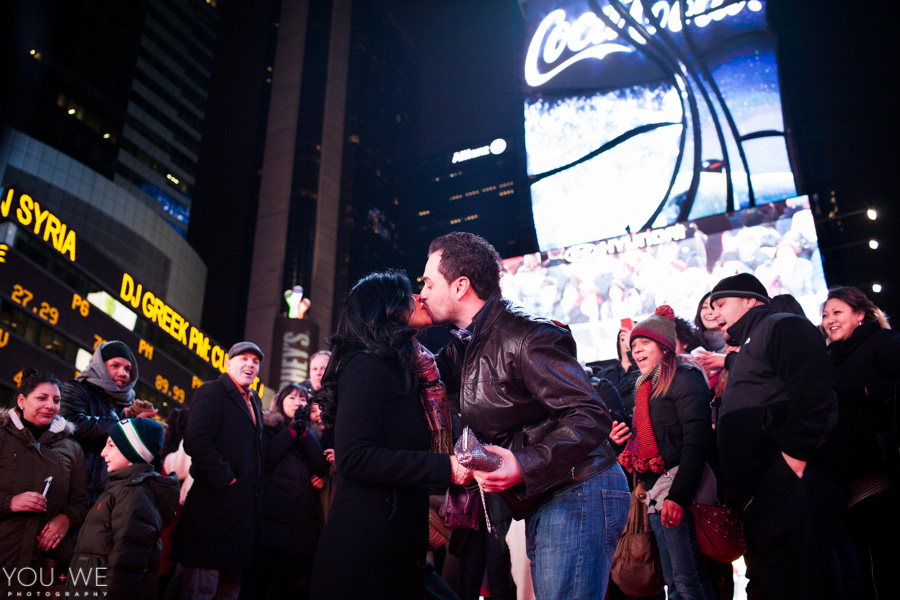 So here is Anthony’s Story:

“Rehanna and I met just over 3 years ago. I had just moved into a condo community known as the New York towers (In Toronto, On). Coincidentally, Rehanna had lived here as well, RIGHT NEXT DOOR!! After meeting out in the hallway (of our building known as the Chrysler), we slowly became close friends and eventually started to date. Just 5 months ago we decided to move in together.

As the relationship progressed I knew that we were ready to get engaged. I spent the past couple of months researching and purchasing the ring. But I was not sure yet how I was going to propose to her. I wanted something sentimental so I started to think about our story. How we met, where we fell in love, etc. Everything pointed back to our home in “New York , well at least our little New York. And then it hit me, why not do it in the real New York!

We booked our trip and we were on our way. I had planed to propose on Saturday February 16, 2013 somewhere, anywhere in NYC! Central Park, the Empire State Building and preferably the Chrysler (as you could imagine why), the decision was a difficult one. As the day progressed and the sun went down I knew my options were changing, Meeting with a staff member in the lobby of our hotel I chatted with him and told him what I was about to do. I mentioned Times Square and he suggested that if I do it there I look for a set of red Steps, “might be a good spot” he said. As Rehanna came down to meet me, we had a cocktail at the bar and we were on our way to what she thought was the restaurant we had reservations at. As the cab took us to our destination we just happened to drive through the Diamond district (I think 47th Street). That got my nerves going even more. Once in Times Square I spotted the red steps and we made our way walking towards them. Rehanna chatted with me the whole time but I couldn’t hear a word. Standing atop the steps I looked around desperately for a person that I could hand my camera to. I found a young lady standing there and turned to her and said…”I am about to propose to my girlfriend could you please take a picture of us?”.

I walked back to Rehanna and we stood side by side for one last picture as boyfriend and girlfriend. I turned to her after and attempted to share some words with her. In that moment she knew what was about to happen. After calming ourselves down, I reached for the ring and knelt down to ask her the important question. After a brief stall she said Yes and we were congratulated with the applause and cheers from all those around us. It was an amazing moment.” 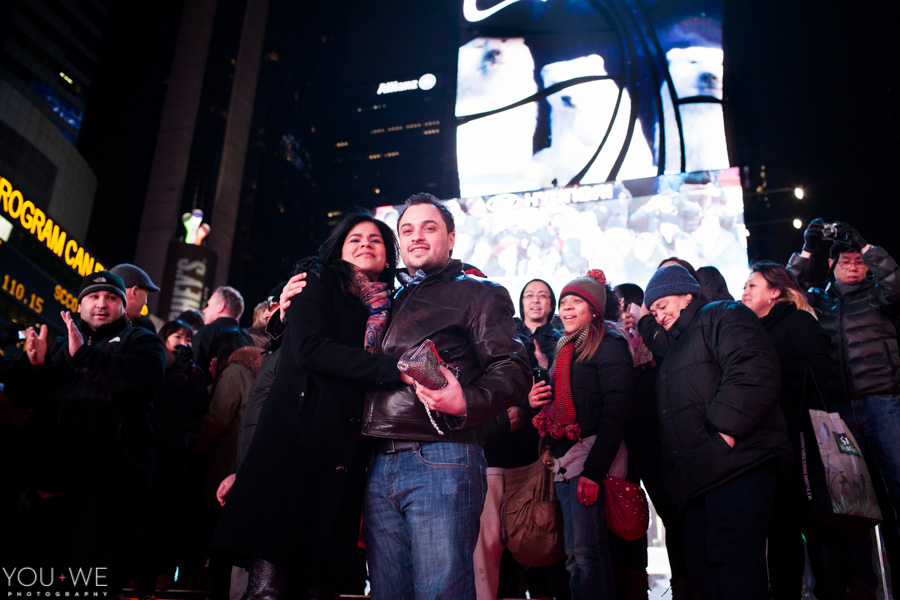 Here is a photo Anthony took of me and my girlfriend Angela. 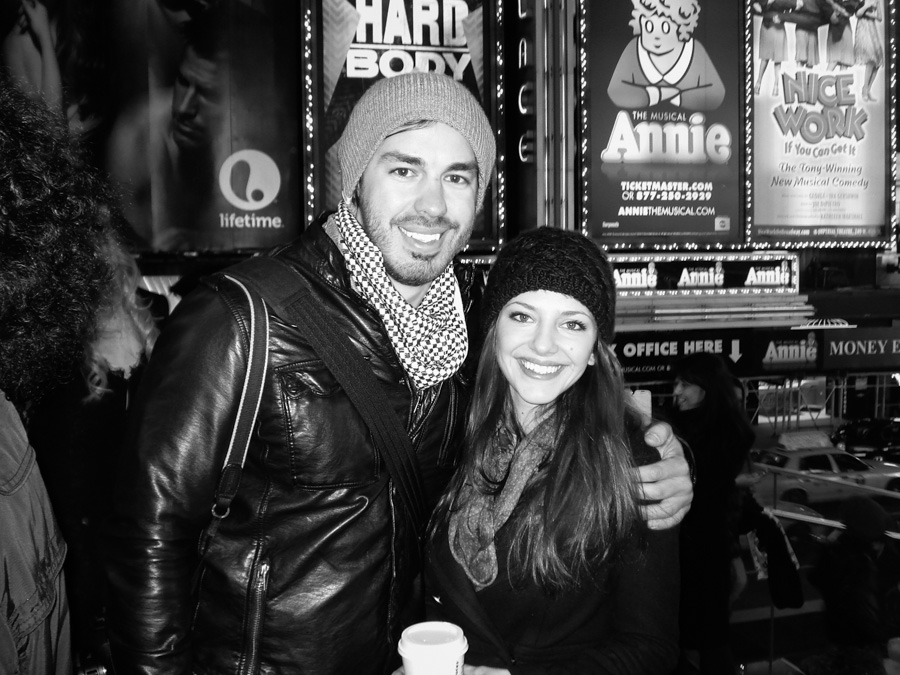 What I learned from this experience as a photographer – Always be ready! As you never know when the “moment” is going to happen.